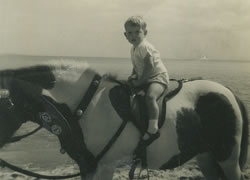 I was born in Edinburgh, Scotland, and developed an early interest in horses.

At the age of three and four, I taught myself to count by racing horses around the board of a game called Totopoly, a horse-based version of Monopoly. This early ability with numbers has stood me in good stead for my long banking career.

The game also led me to develop a love for horse racing. This was well served by television in the U.K., as horse racing remains the second most watched sport, after football (soccer). Indeed, every morning from a young age, the first thing I did was check the racing results to see how my previous day’s picks ran. The second thing I did was read about my favorite football team, the Hearts. They play in maroon uniforms, which is where the idea for the AliFyfe Racing racing silks originated.

I moved to the U.S. in 1984, began a long career in banking, and began learning about horses that race on dirt. I started watching live races at Thistledown in Cleveland, Ohio and later discovered the joys of Keeneland and Saratoga, two of the best places anywhere to enjoy the thrills of horse racing.

I started investing in horses in the late 1990′s through the purchase of shares in partnerships put together by Cot Campbell of Dogwood Stable. Cot is a legend in the racing business and there is not a better person I could have been involved with to start in this endeavor. Cot is a gentleman of the highest order, loves horses, has a wonderful extended family and is the grandfather of racing partnerships (possibly the great, great grandfather). After many years of investing with Dogwood, I decided a few years back to form AliFyfe Racing and start buying horses on my own. This led me to work with Marette Farrell, who we use to help purchase horses.

After getting my feet wet for a few years and figuring out the business side of ownership, I have decided to put together the AliFyfe partnership structure. I believe this partnership structure provides smaller investors with the best chance of getting a decent horse for a reasonable investment. Rather than invest in a single horse, the three horse structure will significantly increase the chances of finding a good one and making the investment successful. 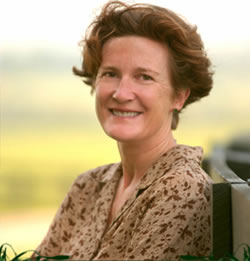 AliFyfe Racing will rely on the skill, dedication and experience of Marette Farrell to identify and bid on horses. AliFyfe Racing will focus on purchasing horses from the two-year-old-in-training sales at both Keeneland and Ocala.

Marette grew up in Ireland as part of a family that has always been involved in the horse racing and breeding industries. She was a national show jumping champion (equestrian in the U.S.) in high school. Marette also represented Ireland in field hockey at the under 21. This is a unique achievement as there has only ever been one field hockey match in Ireland, all others having been postponed over the last 150 years due to waterlogged pitches.

However, horse racing was in Marette’s blood and after college she devoted herself full time to the horse racing industry. If you know Marette, full time really does mean quite a lot of time!

Marette has gained experience worldwide, including time spent in France, Dubai, Australia and finally, in the U.S. She has experience as an assistant trainer and has been involved in all aspects of the breeding, purchasing and ownership of horses. Combining all of this experience with an unparalleled level of hard work makes Marette uniquely qualified. Her reputation is built on an uncompromising search for excellence, irrespective of the investor’s budget.

David grew up close to Finger Lakes Racetrack and worked there on weekends and during the summer during his teenage years. His father owned racehorses since 1968.

David worked with Hall of Fame trainer Woody Stephens from 1984-1990, before starting his own stable. David worked with most of Woody’s top horses, including Forty Niner and Danzig Connection.

David has trained many stakes horses, his best being Awad, a four-time Group 1 winner, including the Arlington Million. He has consistently raced with a good win/place/show record and has had a particular affinity for grass horses. Alifyfe Racing is glad to have him as part of the team.

Michael was born in Yorkshire, England. He was a champion steeplechase jockey and followed this as a champion trainer. While training in England, he achieved two amazing feats:

He moved to the United States in 1987 and quickly established himself as a leading trainer. His most-acclaimed feat was with Da Hoss, who won the 1996 and 1998 Breeders Cup Mile races despite being injured during the two-year period and only having one prep race.

About
Alistair Fyfe is the sole owner of Alifyfe Racing. He is happy to discuss partnerships with interested parties.